COLD WAVES is a celebration of Chicago’s relationship with industrial music, the memory of a fallen brother, and a fundraiser for suicide prevention charities. In the summer of 2012, Chicago lost one of its most loved and respected sound engineers and musicians, Jamie Duffy. His work ethic and ingenuity in the local music scene was a gift to many musicians. His abrupt passing had a profound effect on the electronic and metal music families he meant so much to.

In need of healing and hope, we brought 14 bands together for one magical night that year to raise money for Jamies family and say goodbye. But in the end, it was more of an awakening… a rebirth… a breaking wave. The success of the show pushed us to build it into an annual event, stretching over a weekend and moving it to Chicago’s iconic Metro.

COLD WAVES aims to shake the pillars of heaven by collecting the bands, styles, sounds and attitudes that Jamie held dear, and cement the sound of a Chicago institution alive and well. From Wax Trax! and Medusas to Uncle Al and Chicago Trax, this is our history and our future, the melding of man, woman and machine, the sound of melody, muscle and hate, basking in the glow of attack ships on fire down the shores of pluto. 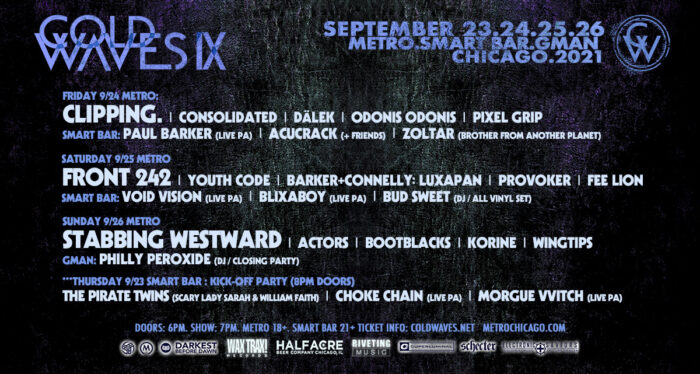