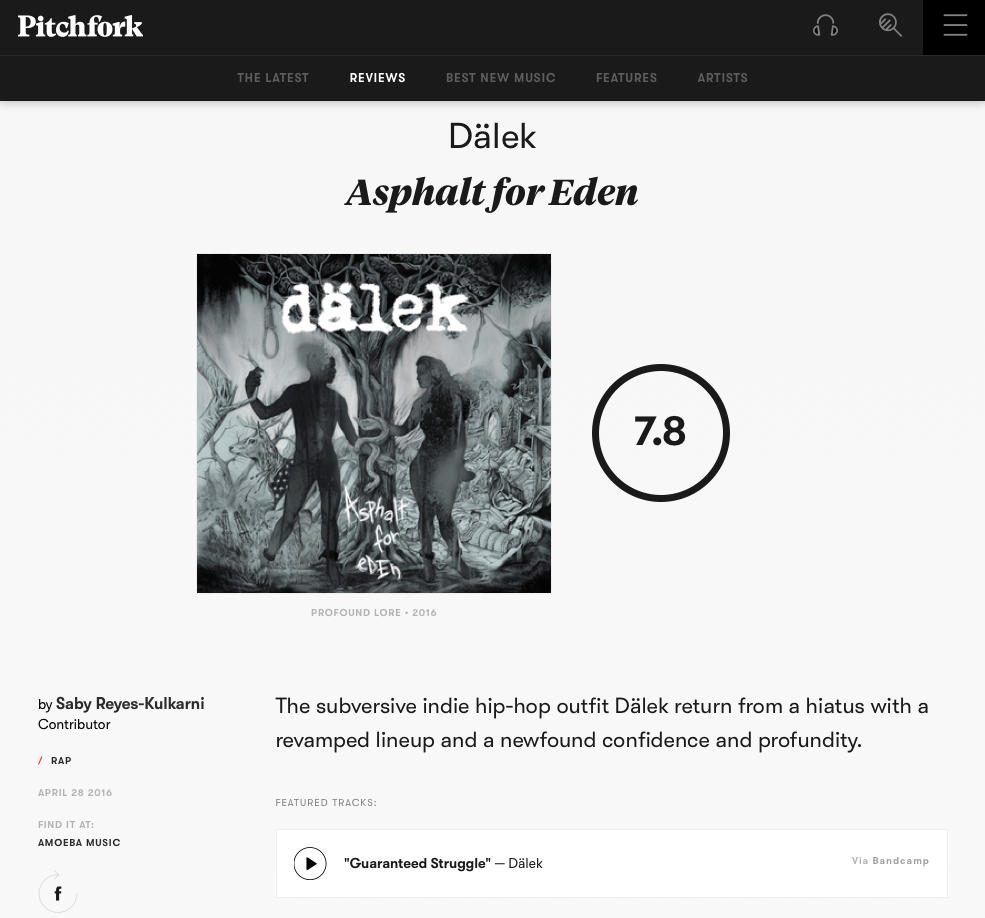 Pitchfork Media released their review of Dälek‘s ‘Asphalt For Eden‘ Giving the new album a 7.8 rating and a glowing review by writer Saby Reyes-Kulkarni.

That Dälek …”manages to craft yet another hybrid of hip-hop with outside elements isn’t especially surprising. It isn’t even necessarily all that surprising that Dälek 2.0 goes a long way towards reinventing its sound while still retaining its essence. But no matter how used to this group’s agility we’ve become, it doesn’t make the step forward it takes on this new material any less impressive.”

You can read the full review HERE.

Here are some other notable quotes about Asphalt For Eden:

“…if you ever wanted to experience nerve-fraying soundscapes and atmosphere that simultaneously scrapes clouds while grinding filthy curbsides, this trio is one of your best bets.” – Decibel Magazine

“…voices as potent and righteous as these offer glimmers of hope. I can’t tell you how good it feels just to say, ‘welcome back.’” – Echoes and Dust

“A tour de force of an album that further cements the bands place in the elite league of hip-hop artists that are still taking this art form further and further into the stratosphere.” – Louder Than War

“If their previous albums are anything to go by, their mix of Hiphop, Industrial, Noise, Shoegaze and Krautrock is sure to be one of the highlights of this year.” – Merchants of Air

“As Asphalt For Eden lumbers to its close, it becomes less political, less about the subject and more about tone. This is what makes Dalek great and why the six frustrating years since their last release have built anticipation.” – New Noise Magazine

“This whole album is about creating atmosphere and a headspace to get lost in. These guys absolutely nail it. ” – Nine Circles

“Dälek’s take on hip-hop is foreboding and hypnotic in a way that feels unexpected; sure, in the Age of Future, creepy, dark vibes are almost de rigeur, but Dälek takes it a step further towards the abyss by incorporating a seething electronic edge—think Einstürzende Neubauten, not Soundcloud.” – Noisey

“Mixing the searing political rhetoric of Public Enemy, the suffocating shoegaze textures of My Bloody Valentine and the primal appeal of squealing industrial noise…” – Rolling Stone

“…Asphalt for Eden is thoughtful and eclectic, blending elements of shoegaze, industrial, boom-bap, and ambience both sedative and rousing.” – Sputnik Music

“Asphalt For Eden is the first fruit of this collaboration and while it may be less brutal than Dälek’s previous albums, it still has plenty to engage both the hips and the mind.” – The Arts Desk