Origins of the film from Mr. Reddy himself:

As we wait on pins and needles for the jury verdict from the Michael Brown shooting case in Ferguson, Missouri I’m reminded of why I decided to make ‘6 Angry Women.’ The jury deliberations for the Brown trial have been long and drawn out, and after making the film I can only imagine how hotly contested the discussions must have been.

Citizens like Michael Brown deserve a jury of their peers, and Brown’s family is at least fortunate enough to have a mix of people on his jury. It’s something Trayvon Martin did not have, as his jury consisted of six women, five Caucasian and one Latina. It’s a dynamic that made me question whether or not Trayvon was given a jury of his peers, and also the deliberation that these women endured to come to the decision to acquit George Zimmerman.

In January my wife and I were watching Sidney Lumet’s 12 Angry Men and it dawned on me that the unanswered questions I had regarding the Martin trial could be possibly answered in doing a version of the film, but this time with the six women jurors. It made sense to try, and I started writing down an outline. I knew that I could and should not use the Martin trial verbatim out of respect to the Martin family and to Zimmerman’s family, so I started to create a hybrid case that was largely rooted in the Martin trial but featured details gleaned from other profiling / brutality cases.

As I wrote and researched the trials, I became more and more incensed. My writing started to reflect this rage, and I found that my own politics were starting to get in the way of this being a balanced piece. I was angry at these women, but in large part I was able to be angry at them because I didn’t know them. It’s easy to hate something you know absolutely nothing about. It’s a sentiment that would repeat throughout the process of piecing the film narrative together.

I’d written about 12 pages and decided to put the screenplay away. It just wasn’t working. I started to think of other possibilities, of maybe recreating the incident, but then I thought I’d be getting into Fruitvale Station territory, and while I really liked the film a lot (it made my best of 2013 list), I also did not want to tread down a path already taken.

Cut to six months later and I was in India, laying in a hospital bed with a 107 degree fever. I was cut off from the world in a medical haze, and after a week of not knowing what was happening on the planet, I turned on the television to Al-Jazeera News and saw these images: In my fever dream I kept thinking these were images from Syria or Palestine, but the headline kept saying this was in Ferguson, Missouri. It didn’t look like home, it wasn’t an America I could easily recognize. It looked like a war zone. And then I saw this image, and it all made sense in a cavalcade of rage:

I didn’t need to know the full story. A black man being shot in America unfortunately is not new news, but for me to see the story in India, on an international broadcaster, meant instantly this was a case of racial profiling / police brutality. As I began to read and watch, it became more and more apparent that I needed to revisit my ‘6 Angry Women’ treatment.

It dawned on me that we can go after racist and trigger-happy ‘peacekeepers’ all we want, we can demonstrate all we want, but when it comes down to brass tacks, the perpetrators of these crimes are being let off the hook at the judicial / legislative level. For any victim of racial profiling / police brutality to achieve justice is to face an almost impossible task because the laws of this land, as they are written, require evidence and testimony. In these cases, one side of the testimony is moot because one party is dead. They can’t speak for what happened in those moments. So the burden of proof instantly weighs in favor of the living. Adding to this is the court of public opinion, which invalidates any possibility of a jury being truly objective. FOX News and CNN put this image of Mike Brown onscreen right after showing his dead body:

That’s an image of Mike Brown committing a crime, of stealing some cigarillos from a convenience store. Put the two images together and the narrative of this kid being a hardened criminal rises to the forefront. Just another black thug. It’s easy to do that because nobody at FOX or CNN knew Mike Brown, nor can they make the conclusion that stealing cigarillos from a convenience store is not a crime punishable by death.

These are all things that will make their way into the courtroom via attorneys, and ultimately will be handed over for a jury to decide. The jury room is a place which is supposed to be devoid of personal prejudices and fears, but that seems like an impossibility. Lumet showed that in 12 Angry Men, and once again it seemed ripe for an update. I decided then and there, in late August, with no script in hand, with a small amount of money in the bank, that I was going to greenlight ‘6 Angry Women’ and film it in November. It needed to be done right away, time was of the essence.

Once that decision was made, there was going to be no turning back. I made a promise not only to myself but to Michael Brown, to Trayvon Martin, to Eric Garner, to Amadou Diallo, to Sean Bell, to all the victims of crime whose path to justice has been blocked by the very system that is supposed to protect them. The weight of this decision was massive, and not something I could flake out on. I had to make this film. Failure was not an option.

Little did I know what the next two months would hold. It’s an experience I’ll never forget, from casting my six women to developing the script to actually shooting it over six days earlier this month. We went on an incredible journey, a taxing one, one that allowed us to put ourselves in the shoes of people having to make incredibly complex and crushing decisions. We knew how this film would begin – six women walking into a jury room – and we knew how it would end, with the shooter being found not guilty of second degree murder. How those six ladies arrived at that decision was to be our journey, and it will have transformed us forever.

On set filming ‘6 Angry Women’ with actresses Kate Healy and Alexandra Bennett, and yours truly in the corner. What an experience. 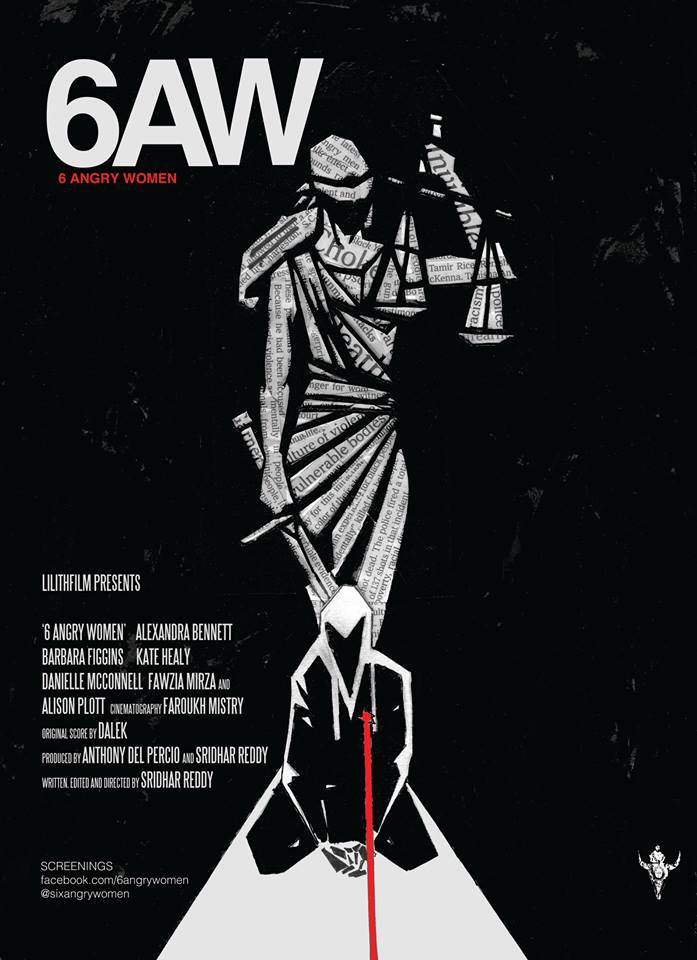